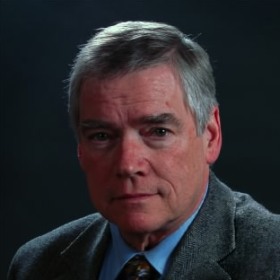 Chris's pyramid odyssey began in 1977 after he read Peter Tompkins' book Secrets of the Great Pyramid. His immediate reaction after learning of the Great Pyramid's precision and design characteristics was to consider that this edifice may have had an original purpose that differed from conventional opinion. After further research and study of source material on various theories, Chris concluded that it must have originally been built to provide a highly technical society with energy – in short, it was a very large machine. Discovering the purpose of this machine and documenting his case has taken the better part of twenty years of research and following the 1998 publication of Chris’s book, “The Giza Power Plant: Technologies of Ancient Egypt” which describes a holistic energy device that is harmonically coupled with the Earth and its inhabitants.

Chris has published over a dozen magazine articles, including the much quoted "Advanced Machining in Ancient Egypt" in Analog, August 1984, and has had his research referenced in over a dozen books on Egypt. In the United States he has appeared on PAX Television, the Travel Channel, Discovery Channel, The Learning Channel, Lifetime Television and most recently on the History Channel in the Ancient Alien episode “The Evidence”.

Chris’s second book, entitled “Lost Technologies of Ancient Egypt: Advanced Engineering in the Temples of the Pharaohs” was published by Inner Traditions/Bear&Company in June of 2010. In this work, Chris focuses on an important aspect of his research into the manufacturing capabilities of the ancient Egyptians and through his engineer’s eye and camera, reveals to his readers previously overlooked magisterial characteristics of Egyptian architectural and manufacturing wizardry.

Sokol: Dear Mr. Dunn, in 1984, Analog magazine published your article "Advanced Machining in Ancient Egypt?". The article suggested that the ancient Egyptians were more advanced than they had previously thought. The scientific world did not welcome it with enthusiasm. Has something changed since then?

Chris Dunn: A lot has changed since that article was published. I wrote this article on a Commodore-64 computer, printed it out on a dot matrix printer and submitted it to Dr. Stanley Schmitt at ANALOG in 1983. After a few edits, he finally accepted it for publication and it was published in August of 1984. In their ANLAB vote of best articles that year, it was voted #2 and was selected for an anthology called ANALOG Essays on Science in 1991 as one of the best non-fiction articles of the 1980s.

There was some feedback on the article, and I responded to a couple of highly critical reviews, one being from L. Sprague De Camp, author of the Conan the Barbarian series. After that, all went quiet until around 1995, when I was alerted to the existence of an internet bulletin board called dejanews where a heated debate was taking place after Rodney Small, a reader of the original article, had started a discussion about it. I joined that debate and it raged on for quite a few weeks.

Back then I was called a “lone voice in the wildernesss” for my ideas. However, as the internet became more widespread and information more readily available for the millions of people who were now accessing it, a large number of the users were engineers and craftspeople who recognized the value of my observations.

I have published many articles and two books since then and strengthened the veracity of that article with new hard evidence that I examined in the field using precision instruments.

Sokol: The boxes in the Serapeum are a challenge to those who attempt to explain ancient Egyptian craftsmanship. What evidence did you find?

Chris Dunn: These boxes are a challenge to explain and I consider them to be the “smoking gun” that identifies a much higher level of manufacturing capabilities than what we have been taught by Egyptologists.

Using a toolmaker’s precision straight edge and solid square, not the kind used for carpentry work, I compared the precision of these instruments to surfaces inside the boxes. Some of the boxes were very rough, so it was obvious that their surface finishes were unimportant to their creators. Using a flashlight behind the straight edge and square I was amazed to find that they were extremely precise. Now the accuracy of the steel instruments was within .0002 inch. To say that the surface of the entire inside of the boxes was within the same would be wrong. There are some areas, where light can be seen between the granite and the steel, but large areas where there is no light. My hope is that Egyptian engineers will do a complete examination of these boxes taking quantitive measures so that we know down to the finest detail their complete metrology. In the meantime, just a rudimentary examination using tools of the toolmaking trade is enough to claim that the tools and inspection instruments that would be necessary to create them did not exist in the ancient Egyptian toolbox. 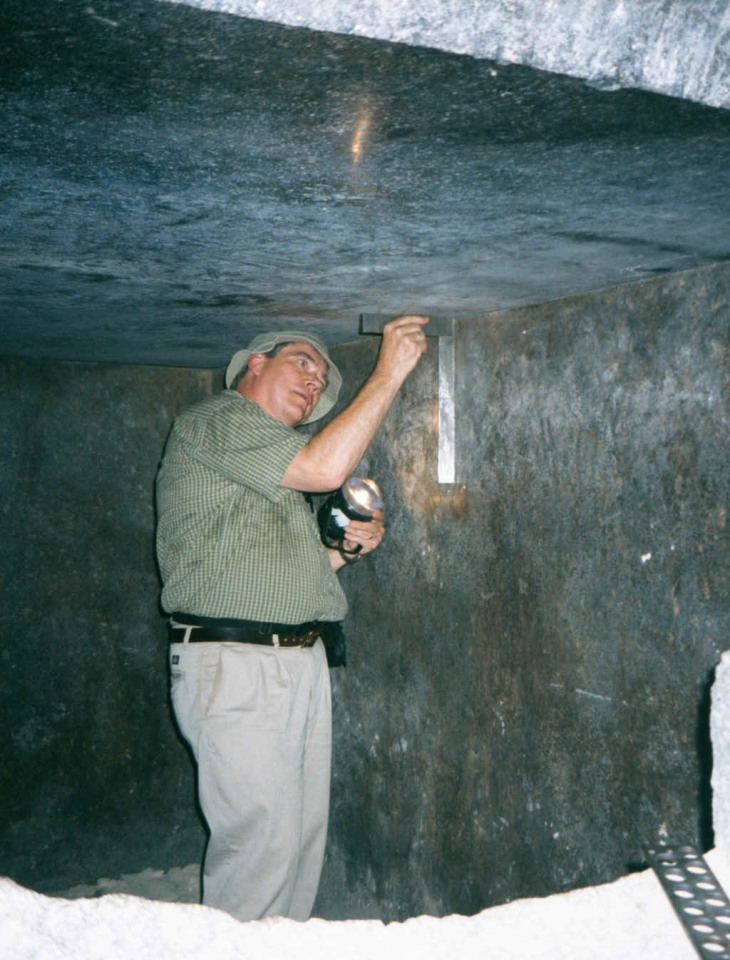 Sokol: What does the face of Ramses have in common with modern precision engineering?

Chris Dunn: The features of the Ramses face show that there was a geometric protocol employed in its design. It shows that the subtle contours of one side of the face are identical to the other to an order of precision that speaks of a tool guided by machinery rather than hand. There are tool marks that can be identified and errors made that caused additional work to be done that exaggerated certain features. Everything about the Ramses face is a testament to the advanced tools and methods employed by its creators.

Sokol: “The Rose Red Rosetta Stone of Abu Roash.” What is behind the mysterious name of this?

Chris Dunn: In 2006 I discovered that the tool marks on this granite stone left a curved surface that ended in a compound radius and to achieve these features would require a saw that measured approximately 37.5 feet in diameter. In 2008, I took mechanical engineer, Dr. Arlan Andrews to Egypt with me and showed him this stone. He dubbed it “The Rose Red Rosetta Stone of Abu Roash.” Similarly, I showed the stone to researcher and writer, Edward Malkowski, in 2007 and he called it the “New Rosetta Stone”.

The original Rosetta Stone, contained the same decree in three different languages, thereby providing the key to deciphering Egyptian hieroglyphs. This stelae, which is housed in the British Museum, was actually black in color. From a strictly engineering perspective, the interpretation of the tool marks on the Abu Roash stone unlocks part of the mystery of how the pyramid blocks were cut. It also leads to another explanation for the so-called “boat-pits” as such a large diameter saw would be better used if the the blade below the center line were underground.

Sokol: Long it has been argued that everything in ancient Egypt was shaped copper. At present, there is a theory of copper with arsenic added, which is allegedly harder. Is such a tool possible to accurately process, for example, granite?

Chris Dunn: There seems to be a strong desire to maintain the history of the world as we have been taught. So many desperate and unfounded theories are dreamed up to explain the evidence left behind by a civilization that is considered to have not been as advanced as the Greeks or Romans. Many attempts have been made using copper saws, tube drills and chisels to shape stone. No attempts have been able to replicate the evidence we find in Egypt.

Sokol: English egyptologist, sir ›› William Flinders Petrie, has already testified to the evidence of the lathes used by the ancient Egyptians, what is really shocking, is that true?

Chris Dunn: I examined the same artifacts that Petrie examined when he made his determination. He was not wrong. The features on these artifacts were without doubt made on a lathe.

Chris Dunn: It’s a fact that ultrasonic machining is used today and could create many of the artifacts found in Egypt. It explains some of the tool marks found on the Ramses statues. It is a question whether the ancient Egyptians had the same technology or were using some other kind of advanced methods.

Sokol: Some people speculate that the builders of pyramid used lasers to cut the masonry and then levitated the stones into place…

Chris Dunn: I have many years of experience working with high powered lasers in the aerospace industry. Lasers do not cut material. They use intense heat that is highly focused to burn material. So it is a thermal process that does not lend itself to the precise removal of igneous rock.

Sokol: It is known that King's Chamber had been subject to a powerful force that caused the walls to push out over one inch. Earthquake or rather an internal explosion?

Chris Dunn: In my book, The Giza Power Plant, I proposed that the expansion of the King’s Chamber walls was caused by an explosion of hydrogen gas that was being used in the pyramid for the purpose of created microwaves.

Sokol: All these argument testify that high levels of technology existed in prehistory on this planet and that the Great Pyramid represents the pinnacle of that technology. What are the public's responses?

Chris Dunn: It seems today that there is intense interest in this subject from all walks of life. I am especially please with the response I have received over the years from engineers and those with a technical background. The research continues and there is much more to be revealed in the future. I have been asked many times over the years to write a sequel to The Giza Power Plant, which was published 20 years ago. After my tour in Egypt in March, it is my intention to do that.

Sokol: Thank You very much for interview. All fans of Ancient Egypt are invited to your ›› March 2018 Lost Technologies Tour! 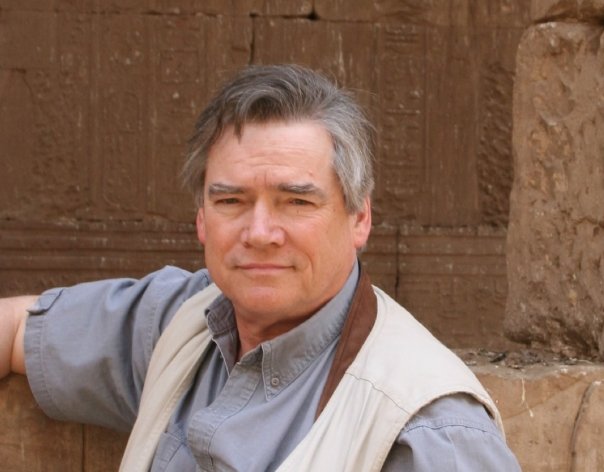 This Interview in slovak language
http://www.cez-okno.net/clanok/exkluzivny-rozhovor-s-chrisom-dunnom