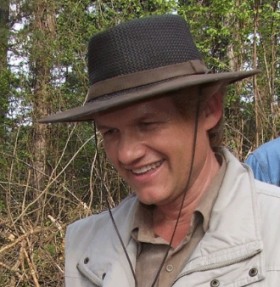 Discoverer of the Bosnian pyramids
Foreign member of Russian Academy of Natural Sciences
Director of “Archaeological Park: Bosnian Pyramid of the Sun” Foundation

Sokol: In the world there are very few archaeological sites which can boast such a large active public interest. Volunteers from around the world to help uncover the place which the consecrated said to be one of the most important archaeological discoveries, which literally rewrites the history books...

Dr. Osmanagich: In April 2005 I first traveled to the town of Visoko, 20 miles northwest from Sarajevo, capital of Bosnia-Herzegovina. My attention was caught by two regularly shaped hills, which I later named the Bosnian Pyramids of the Sun and Moon. For thousands of years, locals have considered those hills to be natural phenomenon because they were covered by one meter of soil and vegetation. However, when I first saw their triangular faces, obvious corners and orientation toward the cardinal points (East-West, North-South), I knew that they had to be constructed by an intelligent hands. Since I had been investigating pyramids for decades I knew that the pyramids found in China, Mexico, Guatemala, Honduras or El Salvador presented the same case of pyramids covered by dirt and vegetation. 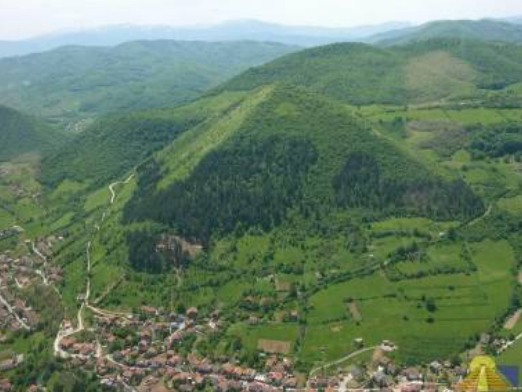 In 2005 work begun on this project and I paid construction companies and geologists to do the core drilling and geo-morphological analysis. I then announced to the world, at the press conference in Sarajevo in October 2005, that the first pyramids in Europe had been discovered. Shortly thereafter I established the non-profit “Archaeological Park: Bosnian Pyramid of the Sun” Foundation and since that time the pyramid investigations in Bosnia have become the world’s largest inter-disciplinary scientific project in area of archaeology. 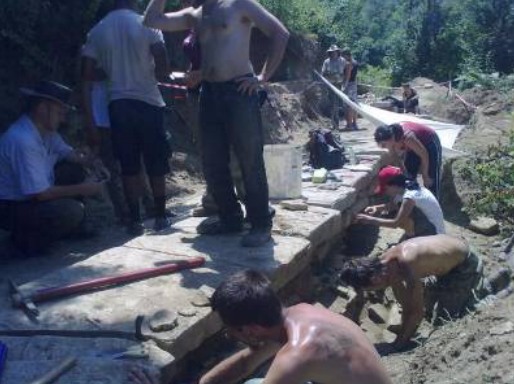 We have spent over 360.000 man-hours in archaeological excavation, sample testing and radiocarbon dating in the period 2005-2015. We’ve determined that the Bosnian Valley of the Pyramids consists of five pyramidal structures discovered to date which I named: The Bosnian Pyramids of the Sun, Moon, Dragon, Mother Earth and Love. The site also includes a tumulus complex and a huge underground labyrinth.

In a case of Bosnian pyramids, we can witness that superior builders knew how to manipulate with the huge quantities of materials. This discovery is historic and changes the knowledge of the early history of Europe for several reasons:

▲ These are the first pyramids discovered in Europe.

▲ The site includes the largest pyramid structure in the world – The Bosnian Pyramid of the Sun – with its height of over 220 meters it’s much higher than the Great Pyramid of Egypt (147 meters).

▲ The Bosnian Pyramid of the Sun has, according to the Bosnian Institute for Geodesy, the most precise orientation towards cosmic north with the error of 0 degrees, 0 minutes and 12 seconds.

▲ The Bosnian Pyramid of the Sun is completely covered by rectangular concrete blocks. The properties of the concrete, including extreme hardness (up to 133 MPs) and low water absorption (around 1%), are, according to the scientific institutions for materials in Bosnia, Italy, Czech and France, far superior to modern concrete materials.

▲ The pyramids are covered by soil which is, according to the State Institute for Agro-pedology from Sarajevo (Bosnia-Herzegovina), approx. 12.000-15.000 years old. Radiocarbon dating from the organic material (fossilized leaf) discovered on the top of concrete blocks on the Bosnian Pyramid of the Sun in summer 2012 and performed by lab in Kiev, Ukraine confirmed the age of 24.800 years +/- 200 years. Finally, two more fossilized leaves were discovered between two layers of concrete blocks with the age of 29.200 years +/- 400 years. This is radiocarbon date and calibrated date is 34.000 years ›› according to dr. Paul LaViolette. These findings confirm that the Bosnian Pyramids are also the oldest known pyramids on the planet.

▲ Beneath the Bosnian Valley of the Pyramids there is an extensive underground tunnel and chamber network which runs for a total of more than ten miles.

▲ Mega ceramic sculptures have been discovered in the underground labyrinth with a mass of several tons which make them the largest found so far in the ancient world. 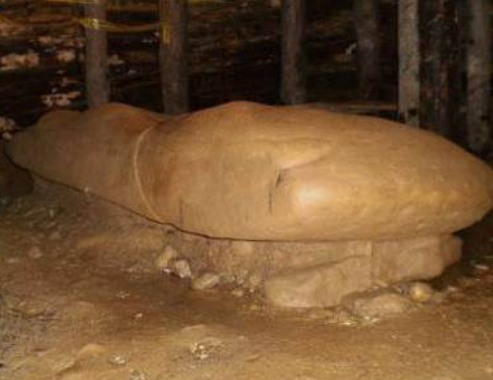 In addition to these facts, three main pyramids in Visoko (Sun, Moon, Dragon) form a perfect equilateral triangle with the distance between their tops of 2.180 meters. Inside this triangle, there is another one: tops of the Love pyramid, Temple of Mother Earth and river Fojnica. Triangle within the triangle – sacred geometry!

Sokol: Measurement results showed that the Pyramids are active – emitting a beam of energy. What is its likely purpose?

Dr. Osmanagich: Four independent teams of energy experts from Croatia, Serbia, Italy and Finland have confirmed an existence of electromagnetic field, radius of 4.5 meters, frequency of 28 kHz, strength of 3.9 V, coming from the pyramid through the center of very top of the Bosnian Pyramid of the Sun.

For the first time such an energy beam has been detected and measured in any pyramid site in the world. Soon after, we detected a beam of ultrasound 5-15 meters wide coming through the top of the pyramid in the range of 28-33 kHz. These frequencies are not found randomly in nature. It takes machine to generate them. Ultrasound of this frequency is ideal for levitation process according to the research of American Ralph Ring. Therefore, we’ve concluded that the Bosnian Pyramid of the Sun is actually a huge energy machine. We’ve measured nearby natural hills in Visoko and natural pyramidal hills in Italy, but no regularity, no anomalies, no regular ultrasound or electromagnetic fields. 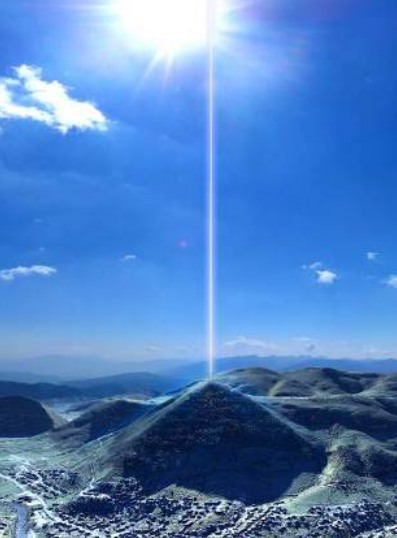 Serbian electrical engineer Goran Samoukovic detected in April 2013 frequency of 7.83 Hz (“Schumann Resonance”) all over the pyramid and underground tunnels proving that pyramid complex guards most beneficial resonance for human physical, mental and spiritual advancement. It seems that the pyramid-builders created a perpetual motion machine a long time ago and this “energy machine” is still working. Outside the Bosnian Pyramid complex, Planetary resonance is much higher and un-healthier.

Bio-Energy fields above the Bosnian Pyramid of the Sun show that pyramid is still active sending energy beams to the ionosphere, unlike the still horizontal fields above the town of Visoko (to the right)

So, this project not only change the history, but has a potential to change our future for better.

The most significant discovery in the last ten years has been the true purpose of pyramids. They are not built as “royal tombs”, “places for rituals” or “human sacrifice”. Bosnian Pyramid complex is built as an energy device for rejuvenation, regeneration, improvement of the air, water and food molecular structure. Also, through the energy beam ultrasound and other forms of energy can be moved on interplanetary level. Therefore, pyramid was probably used as very powerful communication device.

Sokol: The healing effects of tunnel in Ravne known. You recommend are visiting the place for the best therapeutic effect?

Dr. Osmanagich: Under every original old pyramid (Shaanxi in China, Giza and Saqqara in Egypt, Teotihuacan and Palenque in Mexico) underground tunnels were built as a part of construction. Same goes for the Bosnian Pyramids. Network of tens of kilometers in pre-historic underground tunnels, intersections and chambers are located under the pyramid valley. Our Scientific Conference on Bosnian Pyramids held in 2008, 2011, 2012, 2013 and 2014 have concluded that tunnel complex is pre-historical ingenious construction where electromagnetic fields with high concentration of negative ions have been present. Finish sound engineer Heiki Savolainen has measured the same electromagnetic field and same frequency of the ultrasound in the tunnels and on the Bosnian Pyramid of the Sun confirming that they are part of the same complex. 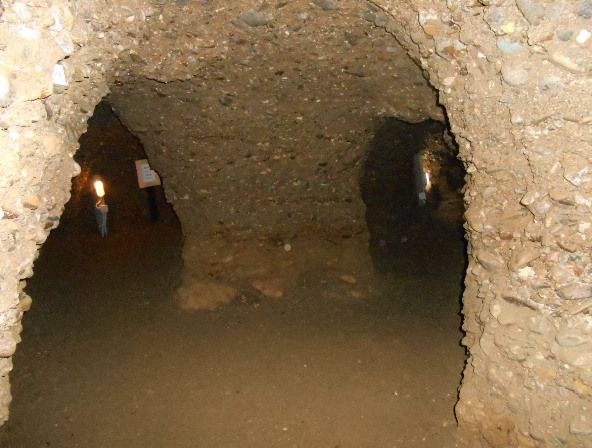 We will get to the pyramid from the underground, 280 meters below the top of the pyramid. I expect to find bigger chambers, maybe open spaces, underground lakes with healing water, elements of sacred geometry, much stronger energy fields. Original and oldest pyramids were about frequencies, vibrations, energy fields. Pyramid energy would improve molecular structure of objects and beings.

Best electromagnetism, an ultrasound of 28 kHz and the Schumann resonance of 7.83 Hz (the best energy field for the physical, mental and spiritual faculties of humankind) has been measured. Also, extraordinarily high concentration of negative ions, up to 60,000 per cubic centimeter (ten times the concentration of the forest on mountains), and the absence of 1) harmful cosmic rays and 2) natural radioactivity. In these conditions, said the scientists, the cells of the human organism can start the self-healing process of regeneration.

Therefore, anytime is good to visit this environment which enable every good-intentional individual to receive the beneficial effects.

Sokol: The recent discovery of new Tunnels in Ravne (ie. Ravne 2) once again confirmed that the Valley are not revealed all its secrets. Can You unveil us more?

Dr. Osmanagich: Second level of the underground tunnels is important discovery. It brings vertical aspect of underground network. It is possible that more levels are hidden. It seems that whole complex was extremely large and complicated. One of the main functions of cavities/tunnels is to amplify natural energy fields.

Sokol: Excavations have passed since the first years that brought about many discoveries Bosnian Valley of the Pyramids and becomes a place of meetings and celebrations. When do you think is the best to come to Visoko, a person to fully enjoy the atmosphere?

Dr. Osmanagich: Anytime is good. One event is coming to my mind, though: Summer Solstice 2016, June 20th, top of the Bosnian Pyramid of the Sun. Everyone is welcomed to be part of beautiful concert with messages of love sent to the Planet.

Dr. Osmanagich: We will have our next Conference in 2017. In the meantime, we have ›› series of mini-conferences.

Sokol: Your lecture in Bratislava in 2014 had a great response. Not everyone was lucky enough to be there, is a chance in near future?

Dr. Osmanagich: Yes, I’m coming for the ›› Conference in Bratislava and will do a lecture on April 2, 2016. Location: Stredisko Cultury, Vajnorska 21, Bratislava. Presentation in Prague will follow on April 3rd.

Sokol: Are You “planning” any surprises?

Dr. Osmanagich: Bosnian Pyramids are not just another archaeological discovery. They are globally important. It is about the change of the view of our ancient history. Change of scientific paradigm. Potential to change our future for better: no elite science, open minded researchers, raise of global consciousness, volunteerism in archaeology, combination of physical and spiritual science, free energy, shortly pyramid science can be base for the better world.

Every step, every new discovery, every new visitor or researcher in Bosnia is important. New, positive surprises will come with them.

Sokol: Thank You very much for interview.

The ›› Project ARCHEO is here for all friends of alternative and official view of history, archeology, research and other related matters.

We bring you detailed report from the Valley of the Bosnian Pyramids and next interview with Dr. Osmanagic to celebrate the 2nd Anniversary HERE.

This Interview in slovak language
http://www.cez-okno.net/clanok/exkluzivny-rozhovor-s-dr-osmanagicom

Editorial: IS IT A PYRAMID OR NOT?
http://www.cez-okno.net/clanok/editorial-is-it-a-pyramid-or-not